Ingmar in a nutshell

Ingmar app matches the ingredients you already have at home with easy, quick and delicious recipes from around the world.

It is currently available on iOS in Sweden and will soon come to other countries. Sign up here if you want to be notified when it can be downloaded on android. Or download it from App Store!

“What shall I make for dinner tonight?” Does this sound familiar to you?

You come back home, you’re hungry, you want to eat something good and easy to make that will not require you to go back out to the shops. You don’t want to eat the same old tomato sauce pasta again. You want to try something new.

Ingmar will solve this problem by storing a list of all ingredients you have available in your phone and/or your online account. It then will automatically compare that list with a recipe database to suggest meals that can be made. Traditional recipe sites and cookbooks are great if you are looking for a new recipe well in advance so you can go and shop all the required ingredients, but it does not work for your weekday dinners. Ingredients make recipes not the other way around.

Who is Ingmar for?

Ingmar is for those who:

The founder and his story behind Ingmar

Kalle Söderman is the founder and CEO of Ingmar. He has a background as Management consultant with an expertise in behavioral change which is very useful when trying to change bad dinner habits around the world. 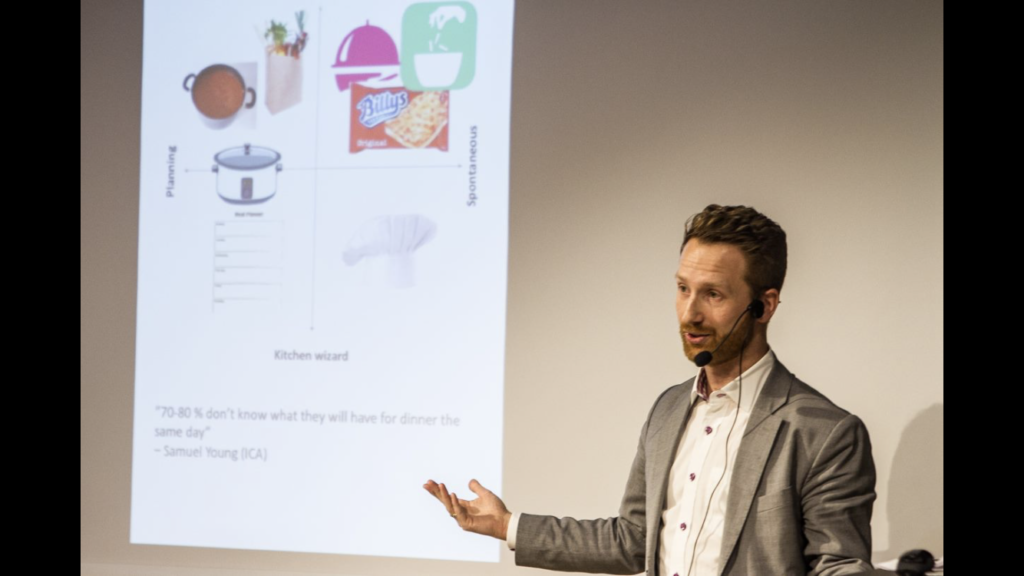 Here’s his story:
Hello! My name is Kalle Söderman and when I grew up I wasn’t really taught how to cook. Living half of the time with my dad who knew like 5 dishes, where one was frying pancakes, another cooking porridge, and a third was how to use the micro to heat up a Gorby or frozen pizza with some extra banana slices.So when moving to my own place my creativity in cooking food was fairly limited.

Later when I started my career as an IT and Management consultant, there were so many evenings where I got home hungry and tired but did not know what I should eat for dinner. I would stare into the fridge hoping I would get some inspiration from the ingredients I had. But usually it just ended up with me cooking pasta and the big question was whether I would have it with pesto, ketchup or frozen meatballs.

I really wanted to eat more varied meals but could not get myself to do weekly meal plans. Tried out a few prepared grocery bags, but felt that the price was high, the meals weren’t the ones I was craving for, and I still needed to use up food in my fridge that was soon to expire. I also tried physical cook books, recipe sites and recipe apps. But neither of them is that useful when you are tired and hungry and want to have food on the table within 1 hour.

Then one evening while staring into my fridge I thought that maybe there is an app where I can enter the ingredients I have at home and I would be shown the recipes I could make with it. I mean I had so many ingredients at home so there must be countless recipes I could actually make but can’t think of. And all recipes are built up by ingredients, so how hard can it be to do that matching? So I started searching for such an app or website but couldn’t really find one that was good enough.

Earlier I have had the thought that someday I want to start my own company but had not found an idea promising enough. But this time I felt I could be on to something and the idea for Ingmar was growing on me! So I started to research the idea further, using an online course in Human Computer Interaction, or Service design as it is called now, to get started and to do user research, create mockup sketches on how the app could look like, how most of it should work. Also going through a lot of recipes sites and apps. After the course I took another great online course on how to start a startup with Steve Blank and where I learned and filled in a business model canvas.

After that, I became convinced that Ingmar is an idea worth pursuing and that I would regret myself for the rest of my life if I did not try to make it a reality. But, I had no savings, did not know how to program myself or knew someone who could and was interested in spending a lot of unpaid time in building this. So how should I be doing this?

This was late 2012 and I had started to listen to a lot of podcasts about entrepreneurship. Like “Startups for the rest of us” that was suggesting to use freelancing sites like odesk (now called upwork). So I started looking for cheap programmers who could build the app and that I could pay every month from my own salary. And believe me, I came across some really bad programmers and spent a lot of more money then if I would have just taken a loan and payed for professionals to do the app. But now I have both cheap and reliable developers working on the app and backend.

However, this slower process and reworks of the app have made it a more viable product due to a lot of more ideas and feedback from beta users that I have implemented continuously. And since January 2019 it is live in the Swedish App store! Have you downloaded it yet?

The app is not for everyone, even though we all eat and most of us are constantly asking ourselves what we should eat for dinner.

Here are two management four fielders I did that show how you can solve the weeknight dinner problem. 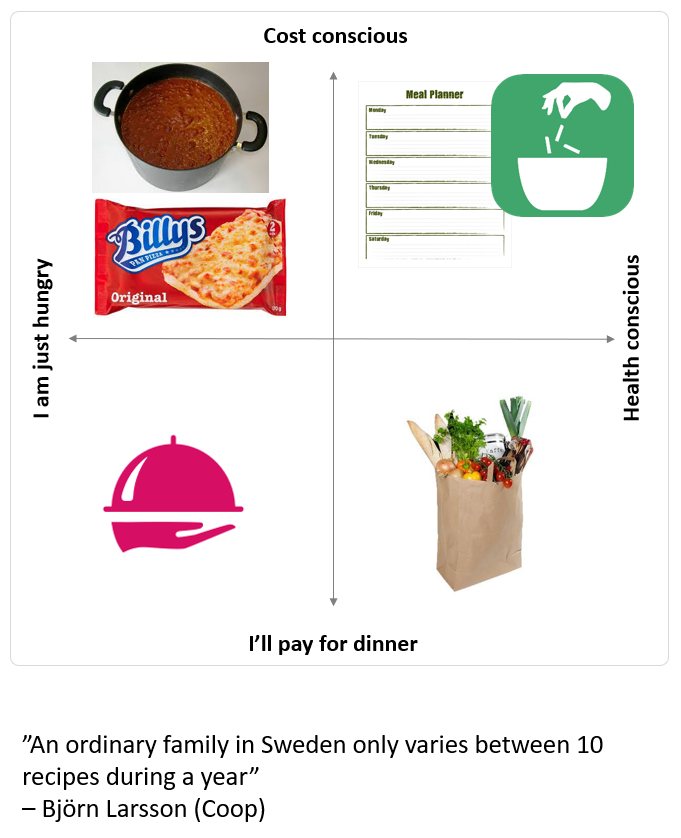 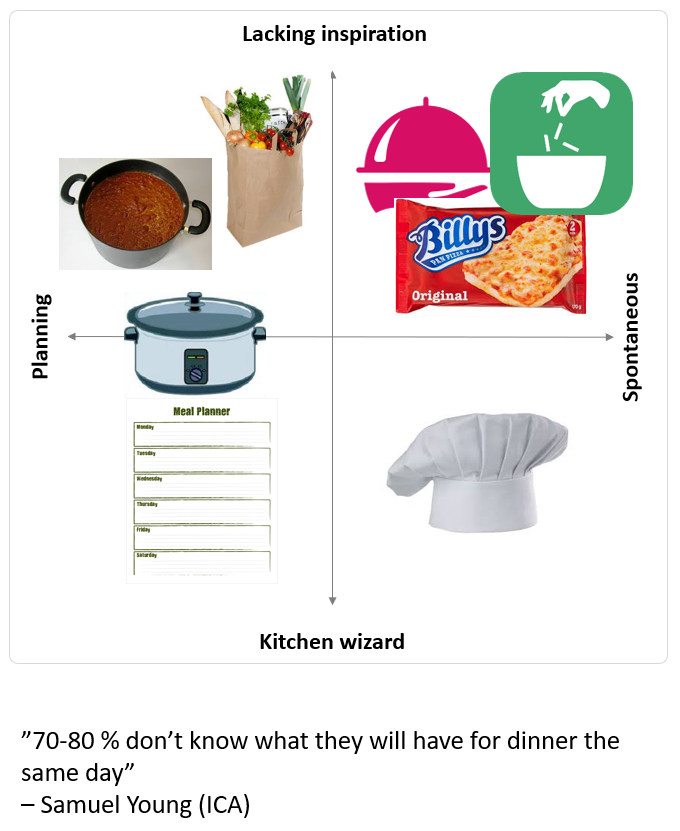 I haven’t done much marketing since I know it currently needs more recipes. Instead I have been busy fixing partnerships. Now we have around 10 food bloggers from Sweden that will be providing recipe collections to the app. We have also got a go ahead from some brand companies to upload their recipes in the app.

To begin with, the aim is to solve the ever present question on what to eat for dinner and to reduce food waste in your kitchen. The problem the app solves is global and the ambition is also global.

The app is built to scale to multiple languages, right now Swedish and English. Uploading a recipe in Swedish will automatically generate it in other languages too, since units, ingredients, etc are referring to specific rows in my database and I can just fetch the corresponding text for the wanted language.

In order to grow fast and take over the world I am thinking of a franchise model. So if you have strong ties to another country and want to own the app for your country, then don’t hesitate to contact me at kalle@ingredientmatcher.com

I am also looking to expand the Ingmar core team. Developers, UX, Data scientist, Content writer, nutritionist, food bloggers, chefs, etc. If you are in any way interested in joining the journey, contact me!